From next summer, there will be daily flights to Malaga by Turkish Airlines connecting the capital of the Costa del Sol to 49 airports in different cities of Eastern Europe, Middle East and South-East Asia.

Vice-president of Turkish Airlines, has recently announced that they will be scheduling a direct daily flight connecting the Turkish city of Istanbul with Spanish city of Malaga, and will begin as from the month of April, which means that the company will increase from five flights a week to seven. 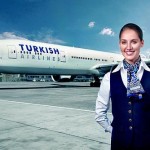 The route that connects Malaga airport with Istanbul is going so well that the company Turkish Airlines are considering increasing from the current five flights per week to a direct connection everyday between Malaga and this Turkish city as from the following month of April. This was pronounced yesterday by the airline’s general manager, together with Malaga’s councillor of Culture, Tourism and Sport, during the presentation of the first joint promotional act that will be displayed as from tomorrow in Istanbul.

Turkish Airlines are backing up their operations at Malaga airport and are establishing a fifth direct flight per week between Malaga and Istanbul. The company assure that this route opens Malaga’s gate to over 190 destinations with whom they can connect to in this Turkish city.

The company Turkish Airlines announced the opening of a route which will be linking Malaga airport with the iraqi city of Mosul. They explained that the expansion of destinations is part of the expansion policy and, in this case, the new flight will begin to operate on the 13th. They will offer two flights a week, with a stopover in Istanbul, where the company has their operations centre from where they deal with 178 destinations all over the world. This way, the airline open their sixth destination in Irak. Furthermore, they also informed that there will be four flights a week from Madrid and Barcelona, as well as three from Valencia.

Malaga airport attended yesterday the premiere of the new direct route between the Costa del Sol and the financial capital of Turkey.